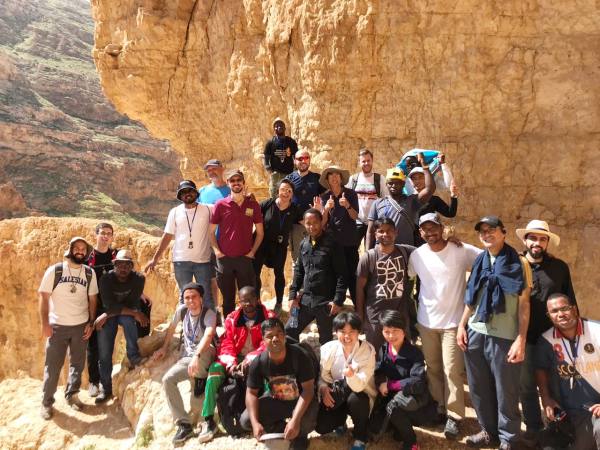 February 29, 2020 – STS – Jerusalem Favoured by beautiful weather, blessed by the warm sun, and as the date was aptly set for the first Friday of Lent, the student faculty left for their fourth archaeological study trip to the Mount of Temptation and Wadi Murabba’at with an able guide in Professor Piotr.

As we began our journey, the guide briefed the students about all the three places we were supposed to visit, though we could not make it to the third location, Tel Arad, because of the Shabbat.

Within an hour or so we reached Tel Jericho. Without delay, we mounted the lowest cable car in the world (223 meters below sea level) to reach the Mount of Temptation, which was truly mesmerizing, and all would agree that it was a gravity-defying sight looking down. We reached the Greek Orthodox Monastery, traditionally regarded as the place where Christ spent 40 days and nights in prayer and fasting and was tempted by the devil (Mt. 4:1-11). The students seemed sunk into the sanctity of the place with greater serenity and composure. And why should they not, for they were standing in a prayerful posture in front of the stone on which Jesus sat and prayed and the cave in which he stayed. What a wonderful and meaningful way to start the season of Lent, visiting the place where Jesus himself fasted and prayed for 40 days.

Thereafter, quickly we moved to the next destination which was Wadi Murabba’at. It was here in these caves that Jewish fighters hid during the Simon Bar Kochba revolt, leaving behind documents that include some letters signed by the leader himself. During the Roman period many remains like large amounts of pottery and weapons were discovered that reflected habitation during the Chalcolithic, Bronze and Iron Ages.

The students were excited as they stood at the cliff of the mountain and listened to the instructions of the guide. Though it was a breathtaking view and tempting site for selfies and photos, the climbing down and up again was very scary and looked as if death door was as close as to the nose. The only slogan that echoed during the terrifying yet adventurous walk was: focus-focus-focus and be careful. Another frightening information from the Guide that hit the ears and raised goosebumps was – ‘this is one of the most dangerous places in the world’. As the students located themselves somewhere in the middle of the mountain, whereupon looking downward it seemed as if death was written for sure and looking up to the sky it felt as if heaven had opened its door. Amidst all these happenings we made our way safely to the cave we were supposed to reach. After the brief explanation from the guide about the historical place, one third of the students took a brave decision to run back to the bus with Fr. Piotr and others returned by the same route. All reached back and quenched their thirst and hunger. Thereafter, the students went to Ein Gedi for a packed lunch and then headed back to STS, Ratisbonne returning around 3:45 pm.