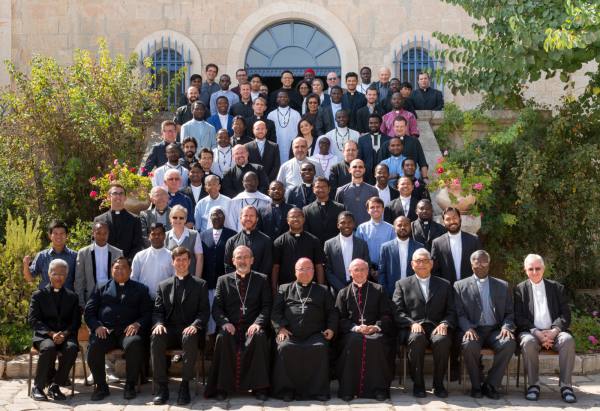 October 19 2019 - STS - Jerusalem The Opening Ceremony of the new Academic Year 2019-2020 of the Studium Theologicum Salesianum, in conjunction with the Dies Academicus, took place on Saturday 19th October 2019. The celebration began with the Holy Mass presided by the Apostolic Administrator of the Latin Patriarchate of Jerusalem, Archbishop Pierbattista Pizzaballa OFM. In his homily, His Excellency thanked the Salesian’s contribution to the local Church, enriched in recent years by the moving of the Theological Study Centre to Jerusalem. With English as the medium of communication, he added, the STS filled a very serious gap in the local community. Finally, His Grace underlined that growing in the knowledge of Christ is not only a matter of academic formation, but it also involves communion with God, listening to His Word and obedience, prayer and spiritual experience. (The whole homily can be found here: https://www.lpj.org/speech-of-archbishop-pizzaballa-for-opening-of-academic-year-at-salesian-theological-study-center/).

After the Mass the academic community gathered in the Don Bosco Hall for the opening ceremony. Words of welcome were given by the Principal of the STS, Fr. Gustavo Cavagnari SDB, who also introduced the topic of the lectio magistralis. Next, Bro. Nelson Mwale SDB gave voice to the speech written by the Dean of the Faculty, Fr. Damasio Medeiros SDB, present for the occasion. After a short salutation given by Archbishop Pizzaballa, Fr. Matthew Coutinho SDB presented the fellow students who had received the highest marks in the year 2017-2018, namely Bro. Parfait Balma M.Afr. from the 3rd year, Bro. Calvin Akunga M.Afr. from the 2nd year, and Bros. Matteo Vignola SDB and Gianluca Villa SDB from the 1st year. The first part of the gathering concluded with the presentations of the new students made by Fr. Samuel Obu SDB and that of the new staff members given by Fr. Andrzej Toczyski SDB.

The highlight of the day was the lectio magistralis of Mgr. Charles Scicluna, Archbishop of Malta and President of the Special College within the Congregation for the Doctrine of the Faith to hear appeals in processes concerning the delicta graviora. After an introductory speech given by Fr. Stanislaus Swamikannu SDB, His Excellency presented his conference entitled: “Priestly Ministry and the Prevention of Sexual Misconduct. Orientations for Candidates to the Priesthood”. In his lecture, he focused on the magisterium of the last Popes and on the need of a correct and balanced formation of future priests who are explicitly called to embrace ecclesiastical celibacy. In this sense, the chief guest invited presbyters and candidates to rediscover the motives for celibacy, to prudently guard this evangelical counsel with the contribution of natural and supernatural means, and to cultivate a series of human qualities in order to develop a mature personality. He specially challenged the audience to give the greatest attention to the theme of the protection of minors and vulnerable adults, reminding also the Church’s general provisions with regard to the more grave crimes which include sex abuse cases. His Grace’s address was followed by a short Q&A session, moderated by Fr. Swamikannu.

The Registrar of the STS, Sr. Angela Ridout SJA, gave the final words of thanks and conducted the presentation of gifts to the main guests. Finally, an apostolic blessing was imparted by the Apostolic Nuncio to Israel and to Cyprus, Mgr. Leopoldo Girelli.

The whole morning concluded with the official photo session. (Some other pictures of the event can be found here: https://www.flickr.com/photos/90617910@N05/albums).