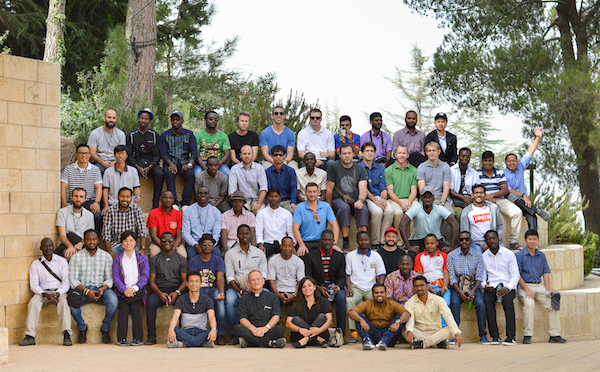 October, 19 2018 - Yad Vashem - Jerusalem I do not how it was arrived at, but it is said that a picture is worth a thousand words. To this, add sound and motion and you probably have a behemothic library! The ‘library’ that is Yad Vashem includes documents, photographs, interviews, videos, testimonies, artifacts, scale models of institutions and even some relics. It arranges its ‘books’ in such a way that the story it tells remains etched in the memory. In so doing, it fulfils its raison d’être. Under the guidance of Fr. David Neuhaus SJ, Guest Professor of Judaism and Old Testament, the student body of the Studium Theologicum Salesianum completed a visit of the site, commemorating the Holocaust and the foundational events of the State of Israel. The whole exercise took just under four hours.

After an explanation of the roots of the Shoah, the pilgrimage began with a silent, prayerful ascent through the garden. Here, the rough-cut dwarf pillars, set in labyrinthine fashion was counterbalanced by a beautifully manicured lawn with an orderly arrangement of trees. The former bears the names of decimated villages and towns while the latter commemorates individuals who “gave up their lives for their friends”, the so called “Righteous Among the Nations”. It served as an excellent transition to the next phase, which began one-and-a-half hours later: the visit of the main hall. Its construction takes the form of a long tunnel, triangular in cross-section, covering over 4000 square metres. Most of it is subterranean, progressively ascending to a skylight at the end: from the dark moments to the years of triumph. The 10 display halls within it flow one into the next, mirroring a page-to-page reading of history. Each ‘page’ is thoroughly engaging, with throngs jostling to browse through the content. It seems that visitors and guides looking askance at each other, a shove here and there and the occasional elbow in the rib are par for the course; likewise, people shaking their heads in shock and dismay at the horror of the Holocaust.

Yes, Yad Vashem’s narration takes the liberty of appealing to people’s emotions, with or without their permission. We might have been in a group, yet everyone was affected personally. That said, certain common posers remain: how do supposedly erudite individuals conduct high-level meetings to construct an efficient, economic death machine, for use on the very species that they themselves represent? How can any group of people claim superiority over another on grounds of race, religion, gender or any other imaginable discriminant? How was all this ultimately permitted? What are the lessons learnt?

What is clear to us is that the visit was not simply about reading history. It was about studying the story through Christian glasses, their lenses being the Gospel values and the frame being a balanced criticism. The Shoah is an element of the past that needs to be soberly integrated into the reality of both who we are as Christians and what we need to do. The conclusion might not have been anything new, but it was unmistakably palpable: what happened must never happen again to any society. A debriefing of our experience led to an enigmatic twist to the opening of this article: indeed, a picture can tell a thousand words, but certain words can change the whole story. As Father David said, there are parallels to the passion, death and resurrection of the Lord, but this is only an element of a much thicker, complex plot. I dare affirm that all doubts were quelled: interreligious dialogue is a Christian imperative.