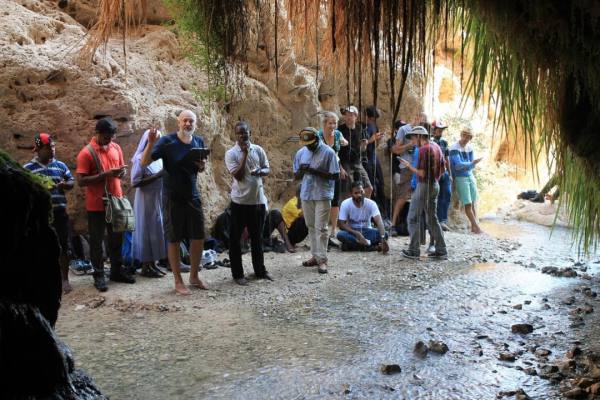 Octorber 24 2019 - STS - Jerusalem On October 24th, during our second Archaeological Trip, we went to En Gedi, the biggest oasis in Israel, and visited three places there.

The first natural place we stayed at was the Dudim Cave or the Lover’s cave, also known as David’s Cave, a small and intimate cavern at the head of the David Waterfall in which we had a short talk by Fr. Piotr Zelazko, our guide. He explained to us that this cave is traditionally known to be the place where David hid from Saul, and had cut his cape as proof of goodwill toward the king. Additionally, we were told that this is the cave which is referenced in the Song of Songs. It was a beautiful and cool place which was a welcomed change to the intense heat of the sun.

The second place we visited was the Chalcolithic temple, the ruins of an over 5,000 years old place of worship which attracted the faithful from the surrounding area. This place was impressive as the sheer age of it, and that there was evidence of terraces and water. Moreover, we were told that the copper vessels from this period found there reflected that of a sacred place; in that it did not have common things found in towns. From this part of the mountain we saw the desert below, and the Dead Sea before us. I was not surprised that people came to worship here, as it forced me to look beyond myself and to look toward God.

After we rested for a moment, we hiked down the mountain toward the third and last place we visited. This site is known as the Old Synagogue, which is dated the 3rd century C.E. In the centre there is a beautiful mosaic, which has some phrases in Hebrew and Aramaic. This particular synagogue, we were told, had a Greek influence, which was evidence of the zodiac signs in the middle. Additionally, we walked through the old village, which had been opened for the public a mere two weeks ago. Lastly, we saw a Calotropis procera tree after leaving the village, which fruit is known as the Sodom apple. The apples look like as if they were fit to be eaten, but instead are empty on the inside.

To conclude, it can be said that this trip was great, because of the great natural sights and the importance of the archaeological sites. We left the desert around noon, tired but satisfied.