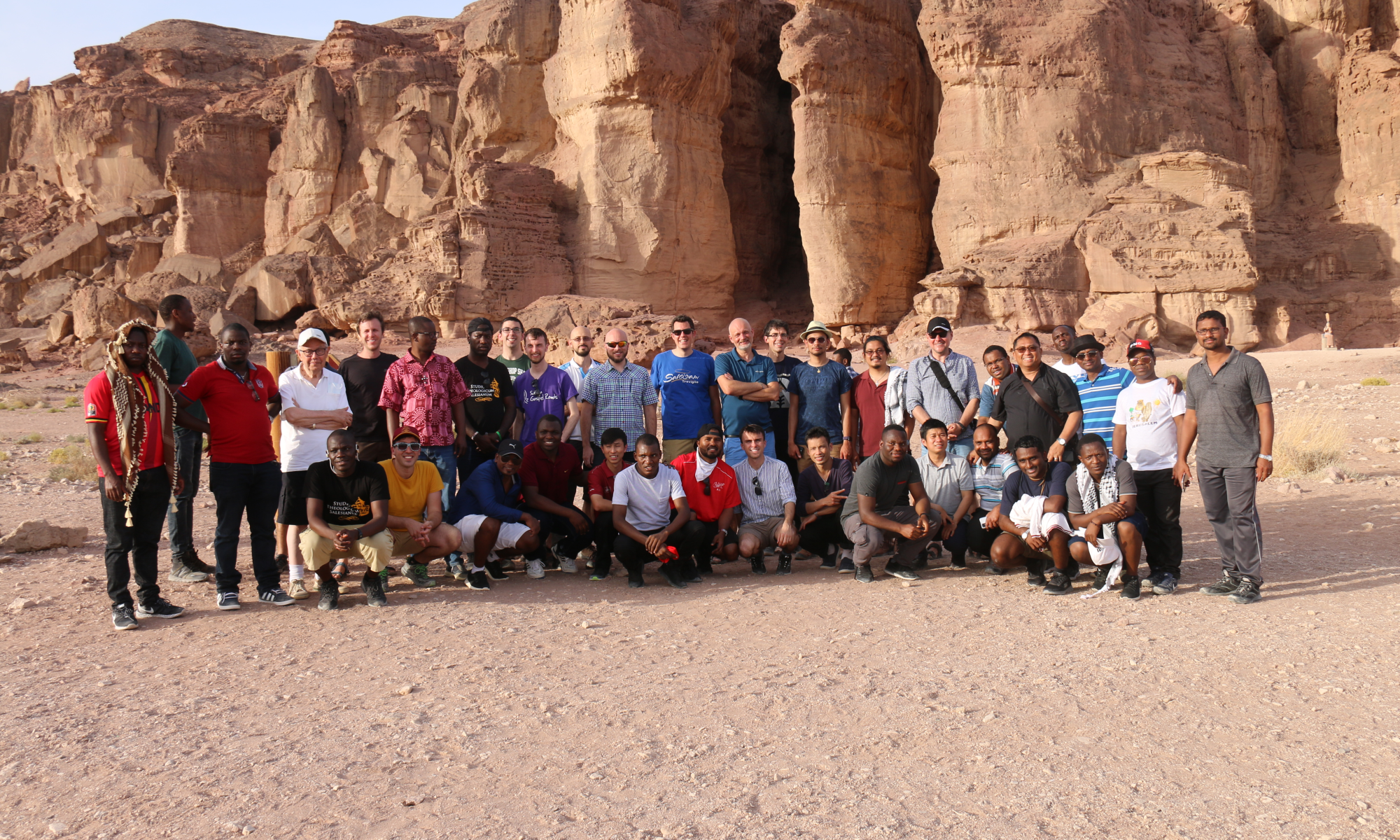 It doesn’t happen every day... it’s hard to convey in one page the beauty of the experience we had together, right at the end of the semester of classes. Southern Israel was still an unexplored land for many of us until recently. Three days were enough to let this corner of the earth, made up of history and nature, into our lives.

We set off on Sunday morning, leaving the mild climate of Jerusalem for the decidedly hotter one of the Negev. The first great fortune we had was to have a guide who is deeply in love with this area of Israel, with its desert, its sea, its history and people. Fr. Piotr was waiting for us at his home, in the parish of the Hebrew-speaking Christian community, in Beersheba. It was from there that we left for our first destination: the archaeological site of Tamar, in the Arava valley, whose layers speak of a history that began in the period of the First Temple (10th century BC) and survived until the Arab period (7th century AD). Accompanying us along the ancient ruins was Yoanan, a young boy who calls this place “home” and whose voice reveals a great passion for archaeology and Bible history. After all, living here, on the edge of the desert, with one’s family cannot be explained otherwise.

It is often thought that a bus trip consists of successive stages, between which nothing interesting happens or is seen. Nothing could be further from the truth in our case. Road 90, which accompanied us to the far south, cuts through the Arava and then the Negev desert and is a perfect observatory for this unique landscape, made up of a plain surrounded by mountains that go from the ochre of sand, to the silver of rock, to the red of copper. Copper! The same mineral that had already attracted ancient civilizations 6000 years ago, also attracted us there, to the mines of Timna. Here, from the marriage between wind and water came to light an incredible scenery, where the red earth takes on the most impressive forms, from the bizarre and giant mushroom to the elegant and majestic arches and pillars of a temple. Evening came and morning followed, the first day.

It does not seem inappropriate to use the same formula here as in the creation story. What we experienced was a real journey through the beauties of creation that are concentrated in this small piece of land. The second day of our adventure was dedicated entirely to the sea and its life. The coral reef of the Red Sea is a unique and precious spectacle and you don’t have to be a diver to witness it. A visit to the Underwater Observatory Marine Park in Eilat kept us busy and “underwater” all morning. Of the many attractions here, two deserved our full attention: an underwater glass-walled chamber and a large
pool with a name as fascinating as it is disquieting: the “shark pool”. Corals and fish of all varieties awakened in us that sense of admiration and meditation on the wonders of creation, which became even more real in the afternoon, thanks to the snorkelling experience. Mask and snorkel and then two hours in the water, spent looking closely at the colours of the fish that we had only seen through the glass in the morning. No sharks, fortunately: those are best seen only in a pool and from a distance! A good dinner at the hotel and a long night’s rest gave us back the energy that the sea had demanded as the price for so much beauty. And so, ready for the third day, we set off on the road back home. Leaving Eilat, a few kilometres away, more animals awaited us in the Wildlife Reserve of Hai Bar Yotvata: no more fish and corals, but ostriches, oryxes, addaxes, gazelles and ibexes. A short safari in this desert area brought us close to these curious creatures, who wanted to get closer to the bus to “see us a bit more closely.” Once again, an immersion in nature, a prelude to the spectacle that was waiting for us... in Makhtesh Ramon. A crater of 40 x 9 km in a red and arid land that gives the impression of having landed on another planet. The view of this landscape from the village of Mitzpè Ramon was as breathtaking as the story the museum tells: that of Ylan Ramon, the first Israeli astronaut to give his life on a space journey. All that remained was to conclude with a salute to the true “masters” of the Negev, those men and women who proved that life in the desert is possible: the Nabateans. Today, the city of Mamshit is in ruins, but it gives a glimpse of the splendour of a civilization that knew how to organize its existence to adapt to these scenarios. The signs of Christianity are also present here, in the two churches built when the inhabitants of this and other villages in the Negev became Christian, Byzantine. It is difficult to forget the harmony of these buildings, whose colour and elegance seem to have risen from the desert with almost no effort, naturally.

And so, with eyes full of all this beauty, we returned to Jerusalem, grateful to Fr. Andrzej for having conceived this great project for us and to Fr. Piotr for the passion with which he made it come true. 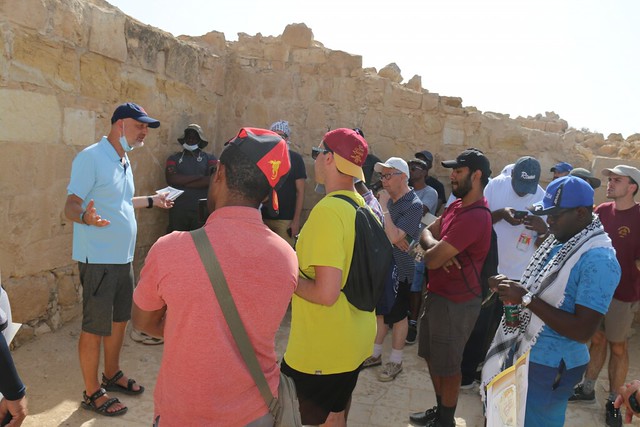 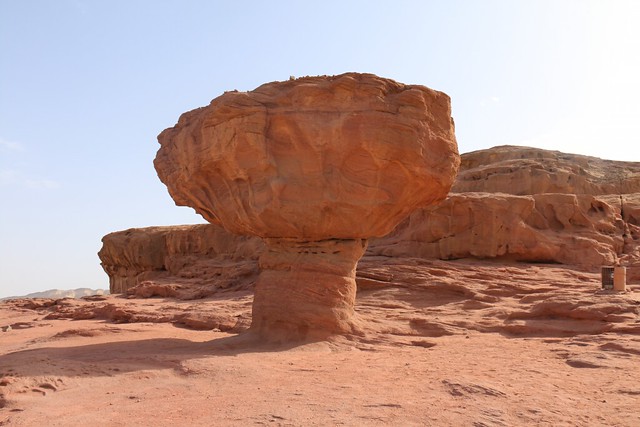 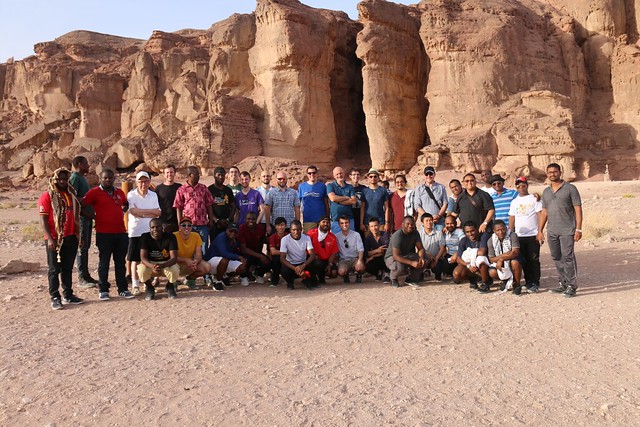