A Latin Christian meets his Orthodox friend in front of the Church of the Holy Sepulchre in Jerusalem and asks him: “On which day is the resurrection of your Jesus this year?” – “Well, four weeks after yours.”

This anecdote shows what living and supporting ecumenism in the Holy City really means: having a large calendar in which all the different dates of the Christian feasts can be logged in. Is it not strange that Christianity prays to be “one in Christ” but insists on different dates for Easter, Christmas and other important liturgical feasts? Or is it true, what malicious tongues tell us: There are different liturgical dates for the Christians, because there is not enough space for all the Patriarchs with their entourage in the grotto of the Nativity Church and in the tomb of the Holy Sepulchre?

While this year (2021) the Anglicans, some Armenians, Roman-Catholics, Protestants and others, celebrated Easter on April 4 th , the Eastern Catholics together with the Greek and Russian Orthodox had their Easter Sunday nearly one month later (28 days), on May 2 nd . In some years the difference of the Easter date between the Christian denominations reaches a maximum of 35 days, in other years it is on exactly the same day for all Christians. It is one of the many signs of division and fragmentation that Christians celebrate Easter on very different dates.

However, certain events of the last weeks around Easter show that the ecumenical movement among Christians is not dead but very alive and active: On March 9, 2021, Archbishop Job Getcha of Telmessos (Autocephal Ucrainian Orthodox Church and representative of the Ecumenical Patriarchate of Constantinople at the World Council of Churches) suggested that the year 2025, which will be the 1,700 th anniversary of the First Ecumenical Council of Nicea (325 A.D.), would be a good year to unify the date of Easter (and consequently of all the other feasts, too) in all the calendars of Christianity and from then on to celebrate on the same date every year.

In 2014, the Coptic Orthodox Pope Tawadros II (Egypt) had already suggested the unification of the date of Easter for all the Christian Churches. His proposal had been supported by other important representatives of Churches: the Syriac Orthodox Patriarch of Antioch, the Ecumenical Patriarch of Constantinople (Eastern Orthodox Church) and the Roman Pontiff. One year later in 2015 Pope Francis even had proposed the second Sunday in April as the general date for the celebration of the resurrection of Jesus Christ for all Christians in the world, referring back to a suggestion made by the Fathers of the Second Vatican Council. While the latest proposal of 2021 had been appreciated highly by some Christian denominations, e.g. the Holy See and his representative for Christian Unity, Cardinal Kurt Koch, others rejected this suggestion entirely: Cardinal Koch´s Russian Orthodox counterpart, Metropolitan Hilarion of Volokolams (Chairman of the Moscow´s Patriarchat ´s Department for External Church Relations) immediately replied that a unification of the Easter date “is not on the agenda of the (Russian) Orthodox Church” and in any case the Russian Orthodox has “no intention” of changing the traditional system of the Easter date in their Church.

But why are there different dates of Easter in the one and only Christianity today? – All Christian denominations follow the same tradition of the 1 st Council of Nicea (325), which determined that Easter Sunday has to be celebrated on the first Sunday after the first full moon after the beginning of spring and after the Jewish Feast of Passover (Pesach). With this decision of the Fathers of the Council of Nicea an intense controversy of the Early Church came to an end: The dominant Roman Christians and their tradition exulted, while Christians in Eastern Provinces as Asia and Syria who celebrated the tradition of the 14 th Nisan, the day of the Jewish Passover feast (for this they were called the “quartodecimans”), had to change their custom.

After the Council of Nicea, the Easter date was fixed for all Christians on the same respected date for more than 1,000 years. Today the Eastern and the Western Churches celebrate Easter again on different days, what happened? The current problem is simple but at the same time complex: all Christian Churches are still following the rules of Nicea, but they use different calendars. While the Churches of the Eastern (mostly Orthodox) tradition follow the Julian calendar, the Churches of the Western tradition follow the Gregorian calendar. But the system of the “Julian calendar”, named after the Roman Emperor Julius Caesar (46 BC), had a flaw: it lagged behind the solar year more and more throughout the centuries, and in the 16 th century the difference was up to ten days. The Catholic Church as scientific authority at this time decided on a new counting of the dates in order to bring the solar year and the calendar back into harmony. This “Gregorian calendar”, named after Pope Gregor XIII, came to birth in October 1582, skipping ten days of the former Julian calendar and setting 365 days per year, including a “leap year” with 366 days every four years. By the way, it is a fascinating part of Church history that Teresa of Ávila, the great nun and saint that reformed the Carmelite order, died on October 4, 1582, the last day when the Julian calendar was in force, and had been buried one day later, which was October 15, 1582. Today most countries of the world follow the counting of the Gregorian calendar, including the (Western) Christian Churches. And the Julian calendar is still in use in the liturgy of the Eastern (Orthodox) Churches.

Is there any solution for this difference? Experts of theology are still in discussion. Father Nicodemus Schnabel, Benedictine monk of Dormition Abbey in Jerusalem and expert for Eastern Liturgy, in April 2021 proposed the “Jewish-Christian solution” that Easter should be celebrated on the Sunday after Nisan 14 th (Passover / Pesach), following the Hebrew (lunar) calendar. This led Andrea Riedl, deputy Professor at the Chair of Early Church History and Patrology at the University of Regensburg, Germany, to the harsh response that the first “Christians” at the time of the Early Church drew a strict line to Jewish Pesach (traditions) e.g. by emphasizing Sunday as the day of the Resurrection of Jesus (cf. Didache). Representatives of the Chief Rabbinate (in Germany) also took part in this Catholic theological discussion by pointing out that the difference between Passover and Easter marks an important point of intersection between Judaism and Christianity. These feasts, traditions and their religious backgrounds should not be mixed, but Christian Churches should be aware of their Jewish roots, as long as the Christian denominations still show enormous differences regarding Judaism – from anti-Semitism to fraternity. Father Nicodemus Schnabel rounded off the topic by emphasizing Jewish-Christian dialogue in unifying a common Christian date of Easter after the Jewish Feast of Pesach.

It seems that the current Christian discussion on the date of Easter opened up a new minefield. Is there any possibility of a peaceful solution – although we are well aware that even the Early Church Councils appeared more than a battlefield of bishops than a unanimous choir prayer?

The current discussion reminds me of an anecdote attributed to the Austrian Jew and Israeli philosopher Martin Buber (1878–1965), told by the Romanian born Jewish-American writer and Holocaust survivor Elie Wiesel (1928–2016): While Jewish faithful are still waiting for the Messiah coming to redeem the world at the end of the days, Christian faithful are also waiting for Jesus the Messiah’s return. And so, Buber declared, we should all wait together. He
continued: “And no doubt when the Messiah comes in those end days, someone will lean over and ask in his ear, ‘Hey, have you been here before?’ And when that happens, I hope I’m here too so I can caution him, ‘For heaven’s sake, whatever you do, don’t answer that’”.

Not only in Jerusalem the calendar of religious feasts shows duplications and tensions between Christian Churches and Jewish holydays. If we take 1 Cor 8:6 seriously, “Yet for us there is one God, the Father, from whom all things are and for whom we exist, and one Lord, Jesus Christ, through whom all things are and through whom we exist”, we should no longer doubt and debate one unified Easter date, but take first steps and actions to one Christian celebration in different rites. 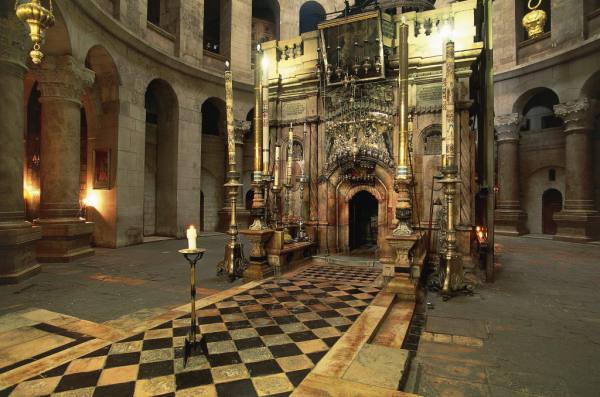