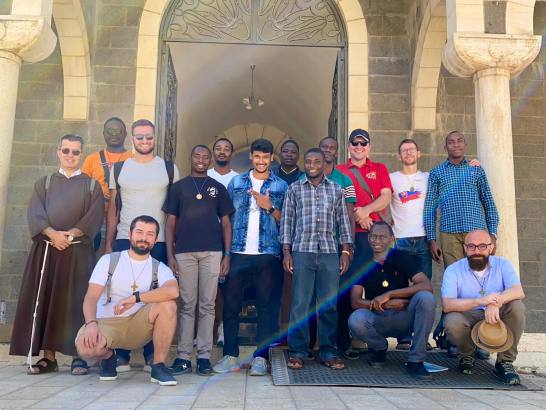 “Better to see something once than to hear about it a thousand times” is a truth which validated the STS 1st year students’ recent Study Trip to Galilee.  For three days they visited the revered sites connected with Jesus's hidden as well as public life in Galilee. Thirteen students with the STS Principal, Fr. Andrzej Toczyski SDB, and expert guide, Fr. Yunus Demirci, OFM Cap., pilgrimaged by bus, starting early in the morning from Jerusalem on Friday 16th September 2022.

The Students, and at the same time pilgrims, first stopped at the Mount of Beatitudes where they received a profound explanation about the traditions and evolution of the site. During the Holy Mass, they contemplated the eight Beatitudes mentioned in the Gospel of Matthew. The next steps led them to Tabgha (from the name Hepta Pegon - seven sources), the site devoted to the miracle of multiplication of bread and fish and to the Church of Primacy of St. Peter. At the Capernaum archeological site it was possible in a concrete and tangible way to remember foremost the healing of Simon-Peter's mother-in-law in his own house, the expulsion of the unclean spirit of a man, and the healing of a centurion's servant. Fortified by the fish of St. Peter in a restaurant, the students enjoyed a half-hour boat trip on the Sea of Galilee and the beautiful sceneries to be seen from the boat. Then they travelled to Nazareth, to the Betharram guest house.

Saturday 17th September was also a very tight day. The morning was devoted to the Basilica of Annunciation, the nearby museum, Church of St. Joseph, the Grave of a Just man, Mary’s two wells and the Synagogue of Nazareth. After lunch the pilgrims ascended Mount Tabor by bus and during the Holy Eucharist contemplated the Transfiguration of Lord Jesus Christ. In the evening, most of the pilgrims and students took part in a solemn procession at the Basilica of Annunciation, accompanied by a rosary prayer in several languages.

On Sunday 18th September it was planned to visit Cana in the Galilee, but both, the Latin and Orthodox churches were not open on Sundays for visits. However the morning prayers on the site gave opportunity to reflect on Jesus’ first miracle. A special visit to the archeological site of the ancient city of Sepphoris (Tzipori) followed. This has, according to some traditions, connections to the parental house of the Virgin Mary and hidden life of St. Joseph.

The way back to Ratisbonne led the group via Haifa with its beautiful Stella Maris church at Mount Carmel. After Holy Mass and refreshments, the group stopped to take some photos at the Bahá’í gardens in Haifa with its wonderful view on the city bay.

It was an exceptional opportunity for the students to stand on the same places as Jesus stood, to touch, smell, taste, feel, imagine, perceive not just intellectually but by the whole person, all dimensions including the spiritual one. Especially at the beginning of their studies, may this experience help them to deepen and broaden their horizons of faith.