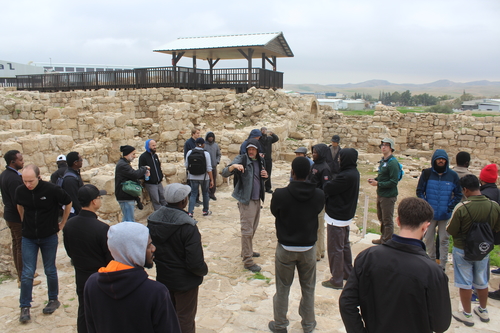 February 23 2018 - Wadi Qelt On a slightly dreary and rainy Friday morning the Students of STS boarded a charter bus for another Archaeological Excursion, this time to Ma’ale Adumim, Wadi Qelt, and Jericho. Fr Piotr Zelazko led the excursion, with a contingent of STS professors joining.

The first stop was the Monastery of Martyrius, the most important Centre of cenobitic life in the Judean Desert during the Byzantine era and located at Ma’ale Adumim. The students learned of the social impact of such a complex through its economical impulse to the neighborhood as well as structures for settlement and thriving. Architecture, art and life of monasteries during this period were also discussed. After a short visit, came a ride down the hill to Mishor Adumim and the Monastery of St Euthymius. Founded as a Laura by the Armenian master of Martyrius, it later became another one of the oldest examples of cenobitic lifestyle in the Judean Desert. While there is no large square, the remnants of cisterns, animal holdings and mosaics in multiple chapels attest to its praxis of life.

Next came a visit which many students had been looking forward to: The Monastery of St. George in Wadi Qelt. The group was privileged enough to enter the monastery and hear some background on the lifestyle of the Greek Orthodox monk residents from one of them. The “Cave of Elias” was also visited and Monastic lifestyle was discussed at great length.

After the climb out of the Wadi, the excursion continued to Jericho, namely to the ruins of Herod’s palace and finally to the monastery of St. Gerasimos. The history of these sites as well as the visualization through the ruins helped the students grasp life of the Herodian and Byzantine periods respectively. These excursions are always a great blessing in that they bring all of the education of Theology to life.