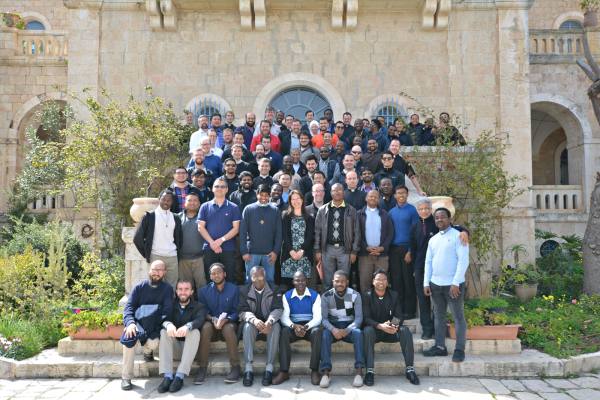 March 1 2018 - STS - Jerusalem On Thursday the 1st of March, the Studium Theologicum Salesianum hosted a Cultural Day themed, “The Medicine of Compassion: Learning about Hope from Refugees”. The students, faculty, and staff of STS were joined by the third-year students of Mundelein Seminary of Chicago, Illinois (U.S.A.), along with the faculty that was accompanying them on their visit to the Holy Land.

After a short prayer and the Principal’s words of welcome, Fr. Eric Wyckoff introduced the Chief Guest. Mrs. Stephanie Saldaña, originally from San Antonio, Texas, received a Bachelor’s degree in Literature from Liberal Arts College in Middlebury, Vermont. She went on to receive a Master’s Degree in Theological Studies at Harvard Divinity School with a focus on Muslim-Christian dialogue as an Elizabeth Monrad Fellow. She was also a Thomas Watson Fellow in the Middle East and Europe and served as a journalist in at the Lebanon Daily Star, Beirut. In 2004 she traveled to Damascus to study Arabic and Islam on a Fulbright Scholarship, specializing in the Prophet Jesus in Islam. In 2009 she joined the Faculty of Al-Quda Bard College where she is a Lecturer. She wrote “The Bread of Angels: A Journey to Love and Faith” (2010) and “A Country Between: Making a Home Where Both Sides of Jerusalem Collide” (2017).

Mrs. Saldaña shared with all gathered her experiences visiting Syrian Refugees in various cities throughout the Middle East. In her presentation, she mentioned as a gift to be able to convey the immense number of Christians that have been affected in Syria, but at the same time having a personal connection with individual refugees themselves. Most of Mrs. Saldaña’s talk focused on a handful of refugees she has met in her travels throughout various countries and cities, expatriates who had each in their own way come to terms with the reality they had faced and the way in which they were able to not give in to despair or even simply survive this tragedy, but overcome this difficulty finding again the joy of life. The presentation showed the rich culture of the refugees through their music, clothes, and personal stories.

After the main talk, the assembly up into small groups to reflect on the presentation through means of prepared questions. The questions were geared to help the participants connect the presentation to our shared Catholic faith, Scripture, and to help us in our priestly formation as we prepare to go out and lead others to follow Christ’s call to care also for refugees like these. The group gathered again in the hall to share their reflections with one another.

After the main event of the day, everyone gathered for lunch prepared by the Salesian Community of Ratisbonne. This was followed by a little healthy competition between STS and Mundelein Seminary in the form of a few volleyball and basketball games. At the end of the day everyone who participated knew they had received a beautiful example of witnessing Christ present in all those around us and had much to continue to reflect upon from the Mrs. Saldaña’s presentation.