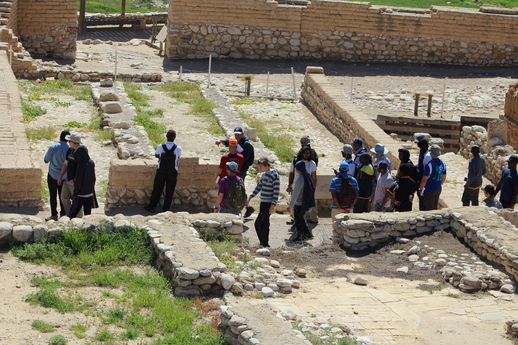 March 14 2018 - Beer Sheva Sun, sand and sea… okay, the last of these and the Negev have not been properly acquainted yet, and it might not happen any time soon, so let us leave it sun and sand. Good enough. Add several millennia of the unrivalled sculpting skills of the elements on nature, the technological nous behind climate-defying flora, the engineering marvels of an Iron Age city and you have the highlights of a visit to Tel Beer Sheva and Ein Advat.

When a horned altar is the first thing encountered on a historical site, even if it is a replica, it must be a very important place. In jest, the guide asked what could be sacrificed there at Tel Beer Sheva. One student was busy scanning the area. He was hoping that Providence had arranged for a fat ram or two to give up on trying to free their horns from the bushes. Well, no such luck. It might have been a real biblical moment; then we realised that the fellow was a member of the food team, barely winning the battle against his hunger pangs.

The layout of this World Heritage site betrays meticulous urban planning, all the way from the gate to its inner recesses. Security (military, food and water), administration, circulation and drainage are just some of the factors that had been taken into account. Take water security: the subterranean system that brought water into the city from the Hebron stream-bed is quite impressive. The reservoir, divided into 5 spaces has a capacity of around 700 cubic metres, with its floor roughly 17 meters below street level. Trust a keen, critical student to ask, “But why is there a fire extinguisher in here? Are you sure this was not an oil reservoir?” You can bet your house that the red, factory-produced fire extinguisher was not from the Iron Age, but he was not too convinced.

The walk through the Ein Avdat Canyon was surreal. Over time, the Master Architect had shaped and planed the canyon walls into features that clearly reminded us of our relative littleness before the forces of nature. Some of the caves had such enormous clear-spans that structural engineers must still be scratching their heads in a bid to explain the distribution of forces in action. The waterfall had however been reduced to a trickle, as if to make us carry the guilt for not returning in the winter. As consolation, it offered a beautiful backdrop for the man behind the camera. The resident fauna also wanted to be noticed. Stirred from their afternoon siesta by our animated arrival, various lizards would sneak out of their crevices, acknowledge our presence by respectfully nodding their heads and then scamper away to attend to more pressing matters. The vultures, probably believing that we were taking the Lenten fast very seriously, did not think we had any meat on us and so they kept their distance. Not very hospitable!

Oh! We cannot forget the story of one of our very active ambassadors. During the hike, his larger-than-life personality was reduced to a few murmurs here and there by his mild acrophobia (fear of heights). Happily, a little encouragement finally had him at the top of the canyon scarp, recording his “death-defying” feat on his Facebook account. He is still very proud of himself, but I do not think he is ready to climb Mount Hermon just yet.

The last stop was a bonus: a visit of the parish of Beer Sheva. No sooner had the table been set for lunch when the welcoming committee of unguiculate quadrupeds approached us. The dog was more enthusiastic than the cat, licking its lips with obvious glee at what was served. Curiosity was all that stirred the cat before it sashayed back to its favourite corner to continue its personal hygiene regimen. A tour of the presbytery followed, the most striking elements being the architectural theme of the chapel and the well-stocked panic room.

It was a very enjoyable trip. I have the feeling that we are not yet finished with the south. A special mention goes to Fr. Stephen who once again proved that age being nothing but a number might have some truth in it. More importantly, he was very good company. Until next time…