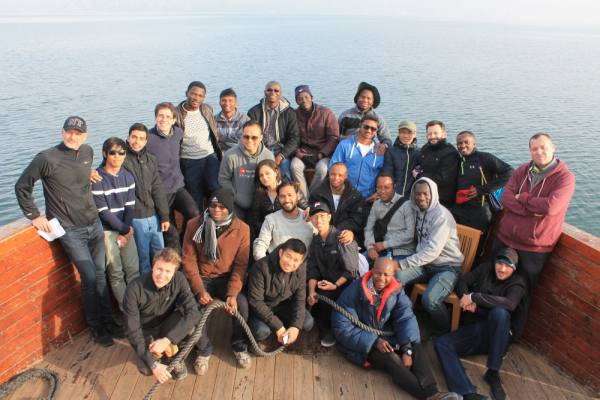 February 01-03 2019 - Galilee On Friday 1st February, the first-year students of the STS University, together with Fr. Gustavo, the Principal, and Fr. Piotr, our teacher and tour guide, travelled from Jerusalem to the region of Galilee. The first stop was Jericho where we were able to see from below the Mount of Temptation where Jesus spent forty days and forty nights before his public ministry. Jericho is mentioned in both the New and Old Testament. When Jesus entered Jericho, the “City of Palms”, the tax collector Zacchaeus climbed a sycamore tree to see him better and we stopped to take a look at this ancient tree.

We then visited the site where Jesus was baptized in the Jordan River. The atmosphere was of happiness, with lots of singing and different groups wearing their traditional dress. We too renewed our baptismal vows. It was a wonderful and emotional experience. Our next stop on the journey was Magdala. It is close to Capernaum, and probably a place Jesus visited. A synagogue, market, houses, and more have been discovered so far. The synagogue has a beautiful mosaic floor and there is a rare stone on display. Mass was presided by Fr. Gustavo, followed by lunch overlooking the Sea of Galilee, after which we had the opportunity to take a boat ride on the same lake where Peter and the other Apostles fished. It was a peaceful and spiritual journey. We finished our day with a hike to Sussita National Park, where we visited the archaeological ruins of Hippos and watched a beautiful sunset. The ancient city was the central city of the Golan during the Hellenistic and Roman/Byzantine periods. The remains of eight churches have been found indicating its importance for Christians. After a long but enriching first day, we arrived at Casa Nova in Nazareth for dinner and a much-needed night’s rest.

On Saturday, we traveled to Nazareth Village, located on a site that was remarkably untouched and unchanged since Jesus time, where the last remaining fields worked by Jesus’ friends, family and fellow villagers have been preserved. After visiting the village, we drove to Tabgha where we had Mass at the church of the Primacy of Saint Peter and then visited the Benedictine church of the multiplication of loaves and fish. Following Mass, we visited Capernaum, the town of Jesus after he left his hometown of Nazareth. Peter, James, Andrew and John, as the tax collector Matthew, lived in the village, which gets a mention in all four of the New Testament gospels, and it was the place where Jesus established his base for preaching and miraculous healings. We admired the 4th century synagogue—under which are the remains of the early Roman synagogue from the times of Jesus built with the local black basalt rock—, the village, the octagon church and St. Peter’s house, as well as a variety of ruins and artifacts from the Roman period. We then enjoyed St. Peter’s fish for lunch.

After lunch we travelled to the place of the Sermon on the Mount, where the church of the Beatitudes is built on the slope. The Mount of Beatitudes is also understood to be the place where Jesus met his Apostles after his Resurrection and commissioned them to “make disciples of all nations”. We departed from there to Cana where Jesus turned water into wine. We enjoyed the time in the church as well as a taste of the famous wine. After another long but inspiring day we finished with dinner at Casa Nova.

The final day of our journey began with visits to the basilica of the Annunciation, St. Joseph’s church, Mary’s well, and the synagogue church. After our tour of the city of Jesus’ childhood, we drove to the place of his Transfiguration. Situated on the top of Mt. Tabor, with a beautiful view of the surrounding area, we celebrated Mass in the Franciscan church which is filled with stunning mosaics of Elijah, Moses and others. After Mass, we began our journey back to Jerusalem. We arrived at Ratisbonne Monastery exhausted, but filled with joy. This experience will be a moment that we will never forget.