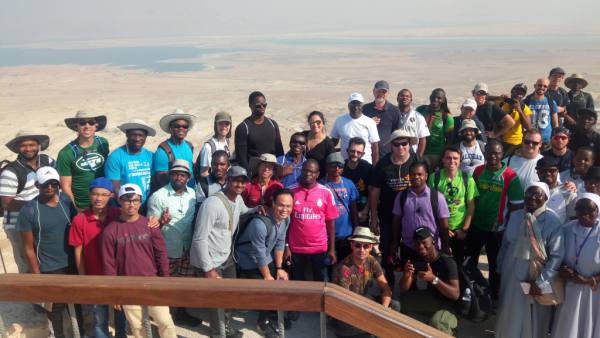 November 12 2019 - STS - Jerusalem Qumran and Masada are well-known places in Israel which locals and tourists, Jewish and people of all traditions, visit for archaeological, historical, cultural or religious reasons. Like them, and even for us, the excursion that we did on November 12th was an occasion for finding connections between what we learnt and what we saw. In fact, the visit gave us a different perspective of the sites, their historical background, and the strong values lived and transmitted from the Jews ancestors.

Qumran is an archaeological site known for the Dead Sea Scrolls, found in 1947 by Muhammed adh-Dhib when he was looking for his lost goat near Wadi Qumran. Discovered in jars dating from the third Century BCE to the first century CE, it is said that the scrolls were hidden from the Roman soldiers’ attack. The manuscripts contain three kinds of text: Biblical texts, non-biblical texts connected to the Bible, and non-biblical texts connected to the rule of the community and to the way they lived. Some have even hazarded about a secret gospel, which tells the “hidden truth” about Christ. The visit and explanations have showed us that there are no mysteries nor secrets in Qumran but, most probably, some financial speculations.

Like Qumran, Masada is a significant place too, an ancient fortification on the mountain where Herod the Great built two palaces for himself and where, at the end of the First Jewish–Roman War, the rebels hid from the imperial soldiers when Jerusalem was destroyed in 70 AD. It happened that the legionaries attacked the insurgents. After a long siege, on the night before the Romans captured them, Eleazer Ben Yair gave the choice to the Jewish people whether to be killed or to be enslaved by the armies or, instead, to kill themselves. Massive suicide was the option chosen. This act, reinterpreted as patriotism, is, together with the site, today’s symbol of national pride. Beyond the remains of palaces, kitchens, baths and other buildings, the place is a symbol of the struggle for freedom and a memorial of the Jewish duty in preserving their way of life and passing it down from the elders to the younger generations.