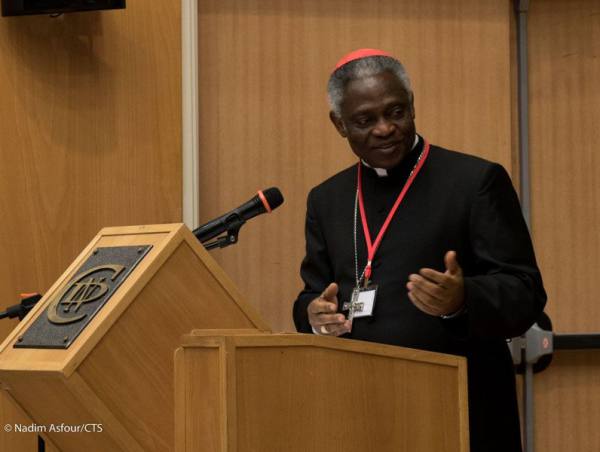 March 12 2018 - Notre Dame Center – Jerusalem On March 12, the STS students and prof.s participated in “The Integral Ecology by Pope Francis for Safeguarding of the Common Home”, a Conference focused on Pope Francis’ 2015 encyclical Laudato si’. The conference was animated by the General Office for Justice, Peace and the Integrity of Creation of the Franciscan Custody of the Holy Land (JPIC). It was also held under the patronage of the Dicastery for Promoting Integral Human Development, the Apostolic Delegation of the Holy See to Jerusalem and Palestine, and the Assembly of Catholic Ordinaries of the Holy Land. The location of the conference was the Pontifical Institute Notre Dame of Jerusalem Center.

The day began with welcoming comments from Fr. Giorgio Vigna OFM, Custodial animator JPIC, and Fr. Francesco Patton OFM, Custos of the Holy Land. Dr. Beatrice Guarrera, Journalist of the Custody of the Holy Land, gave a brief outline of the encyclical Laudato si’. Following this introduction, Cardinal Peter Turkson, Prefect of the Dicastery for promoting Integral Human Development, took the stage to speak of the encyclical in light of recent church history, practical theology, and inter-religious dialogue. Cardinal Turkson highlighted that the encyclical was not a “new invention”, but has been built up through the Churches ministry and reflection, especially in the last 200 years. Hints and building blocks for the integral ecology emphasized in the encyclical can be find in such documents as Rerum Novarum, Mater et Magistra, Gaudium et Spes, Populorum Progressio, and Octogesima Advenies. Saint Pope John Paul II especially emphasized the interaction of the human person and creation in Redemptor Hominis. This document presented three theses: The nature of the human person is primary, natural sources are not all renewable, and ecological pollution has effects on the human person, thereby making morality a sine qua non issue for understanding the world and the nature. Pope Benedict XVI further developed these themes of nature, human, and social justice by uniting them under the banner of “Peace”, developing a covenant language in speaking of the interactions of nature and man, and emphasizing anthropology and the narrative of the “Dignity of the Person”.

The following presentation was given by Prof. Mohammed S. Dajani Daoudi, Director and Founder of the Wasatia Academic Graduate Institute. Prof. Dajani Daoudi highlighted the Muslim view of the man-nature relationship and emphasized its correlation with Christian and Jewish traditions. He also brought in some practical reflections on moderation versus extremism in correcting issues, giving both politico-social and pedagogical examples that he has personally interacted with. The afternoon sessions included presentations by R. David Rosen, the American Jewish Committee’s International Director of Interreligious Affairs, and the Economist Stefano Zamagni, Professor at the University of Bologna and Member of the Pontifical Academy of Social Sciences. Rabbi Rosen outlined the image of an Integral Ecology from a Jewish perspective, looking primarily at Scriptural, Talmudic, and Midrashic sources. Such traditions as the sabbatical year and the food and food preparation traditions show forth the principles of divine ownership, creative partnership, and responsibility. Prof. Zamagni presented the economic and market implications of Pope Francis’ presentation. He pointed out that Pope Francis presented three main theses in this encyclical, namely the reduction of poverty and sustainable development are “two sides of the same coin”, the ecosystem is a global common good, and there should be more focus on biodiversity.

Cardinal Turkson closed the day by identifying 7 “C’s” of the encyclical, and in term theme of our practice of Integral ecology. Such an ecology is in continuity with the church tradition, collegiality with the global bishop’s conferences, built on communication of dialogue with other Christian, Abrahamic, and world religions, is based on a care which itself is custody, but all requires conversion, contemplation, and compassion of our hearts. The event as a whole was not only informative and reflection-encouraging on this theme of ecology for the STS students and professors, but also a great moment of inter religious dialogue of life based on a shared concern and value.