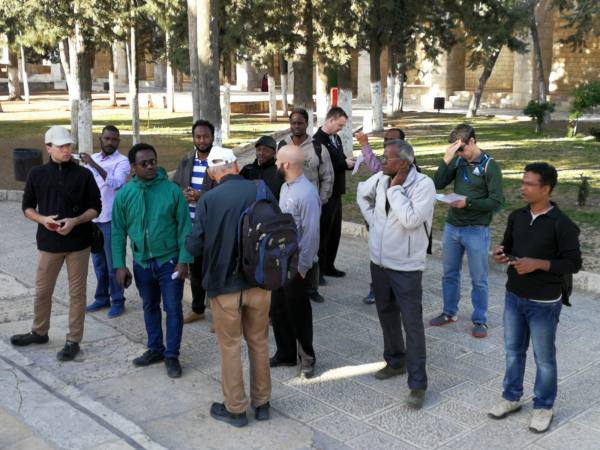 March 26 2018 - Haram Al-Sharif – Jerusalem Joining our guide, Fr. Leopold Vonck M.Afr., as well as the STS Principal, Fr. Gustavo Cavagnari SDB, the first-year students visited the Haram Al-Sharif, a sacred place for both Judaism, as the site of the old Temple, and Islam, as the place of Mohammed’s ascension into heaven. The square, occupying the 1/6 of the Old City, has still some importance for us, Christians, as the site was frequented by Jesus himself many times, even His apostles, and many pilgrims in the past.

At first before entering, we gathered at the Dung gate and then proceeded inside the complex to first see some tombs of venerated Muslims. The Al-Aqsa Mosque, or real site of prayer, and the Haram al-Sharif, or the Muslim “Noble Sanctuary”, stand out in the complex. The later, built on top of the ruins of the Jewish Temple, is one of the most magnificent Islamic monuments with the famous golden “Dome of the Rock”. Fr. Vonck highlighted the architectural art-decoration from the time of Mamluk period and the many Mastbat or open-air platforms for prayer; also, some attractive fountains like the Sabil Qa’it Bay, useful in many ways, especially for washing one’s feet before prayer in the mosque.

The visit continued to The Qanatir with some stairs and special columns, two of which are made from the ancient Christian columns of some churches and arches even probably from the Temple. We progressed to investigate some small domes (Qubba): like the dome of Moses, of the winds or spirits, of St. George or St. Elijah (Qubbat-al-Khadir), the Qubbat al-Mi’raj (Dome of the Ascension of the Prophet), the Qubbat al-Nabi (Dome of the Prophet or Gabriel) and many other interesting domes. Afterwards we saw the mistakenly called Golden gate, thought to be the site of the healing by St. Peter of the lame man (cf. Acts 3:1-10).

Finally, we went outside the Haram Al-Sharif square to the Davidson Center Jerusalem Archeological Park, just a few steps away from the Western Wall. In this park we saw some remains of the Jewish Temple built by Herod the Great, especially the re-use of stones from the said Temple. One stone is thought to be the sight of the place of trumpeting prior to the Sabbaths. We saw the Mikveh’ot or pubic ritual baths, the main gate and the famous Robinson’s arch, the double gates and the remains of the Ophel wall of the 1st Solomon’s Temple, trying also to understand the Jewish culture surrounding the Temple on the use of the coins, the way forward for sacrifice. A great and educational experience was had by all.