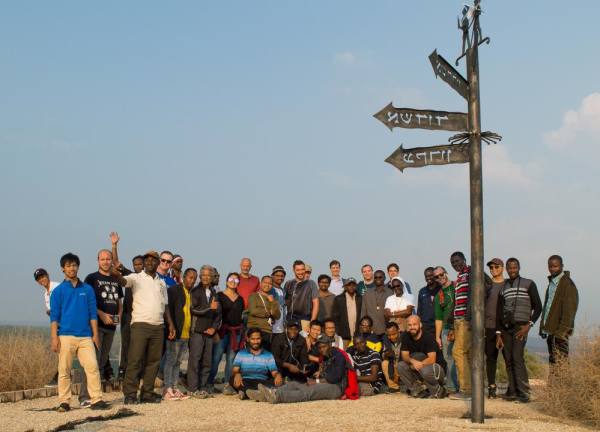 November 07 2018 - STS - Jerusalem Our third and final archaeological excursion of this semester led by our brilliant guide, Professor Piotr Zelazko, was a visit to the ancient cities of Ashqelon, Lachish and Gath, situated in the flatland between Jerusalem and the Mediterranean Sea, one hour‘s distance from the Holy City by car. Providence blessed us with fine weather that helped us appreciate the archaeological sites and their histories.

The first city visited was Ashqelon. It is a coastal city on the Mediterranean coast fifty kilometres south of Tel Aviv, and thirteen kilometres north of the border with the Gaza Strip, today belonging to the Southern District of Israel. In the course of its history, it has been ruled by the Ancient Egyptians, Canaanites, Philistines, Assyrians, Babylonians, Greeks, Phoenicians, Hasmoneans, Romans, Persians, Arabs and Crusaders, until it was destroyed by the Mamluks in 1270. Worthy to be seen are the ruins of the very ancient Canaanite Gate, of the old Roman Basilica and of the Byzantine Church. All these places are reachable by walking and enjoyable by the path along the ruins of the city walls.

Forty minutes eastward from Ashqelon by bus we reached what remains of the city of Lachish: nowadays an archaeological site and an Israeli national park. According to the book of Joshua, the Israelites captured and destroyed Lachish for joining the league against the Gibeonites. The territory was later assigned to the tribe of Judah and became part of the Kingdom of Israel. Of the cities in ancient Judah, Lachish was second in importance only to Jerusalem. According to the prophet Jeremiah, Lachish was one of the last two Judean cities before the conquest of Jerusalem.

The last, but not the least site we visited was the probable ruins of Gath, referred to as Gath of the Philistines, one of the five Philistine city-states, established in north-western Philistia. Gath is often mentioned in the Hebrew Bible, in the books of Joshua, Samuel, Kings, and Chronicles, and its existence is confirmed by Egyptian inscriptions. The site most favoured as the location of Gath is the archaeological mound or tell known as Tel Zafit in Hebrew, located inside Tel Zafit National Park, but a stone inscription revealing the name of the city has yet to be discovered. Furthermore, this site could be very important, because some passages of the Bible suggest that is not impossible, though less probable, that the Ark of the Covenant might be lost in this place.

Archaeological excursions are one of the best experiences offered by our Faculty. Walking on historical sites like these one can really better understand and imagine what happened in the events accounted in the Bible. These moments are a real enrichment of our academic knowledge and a great help for our own spirituality.