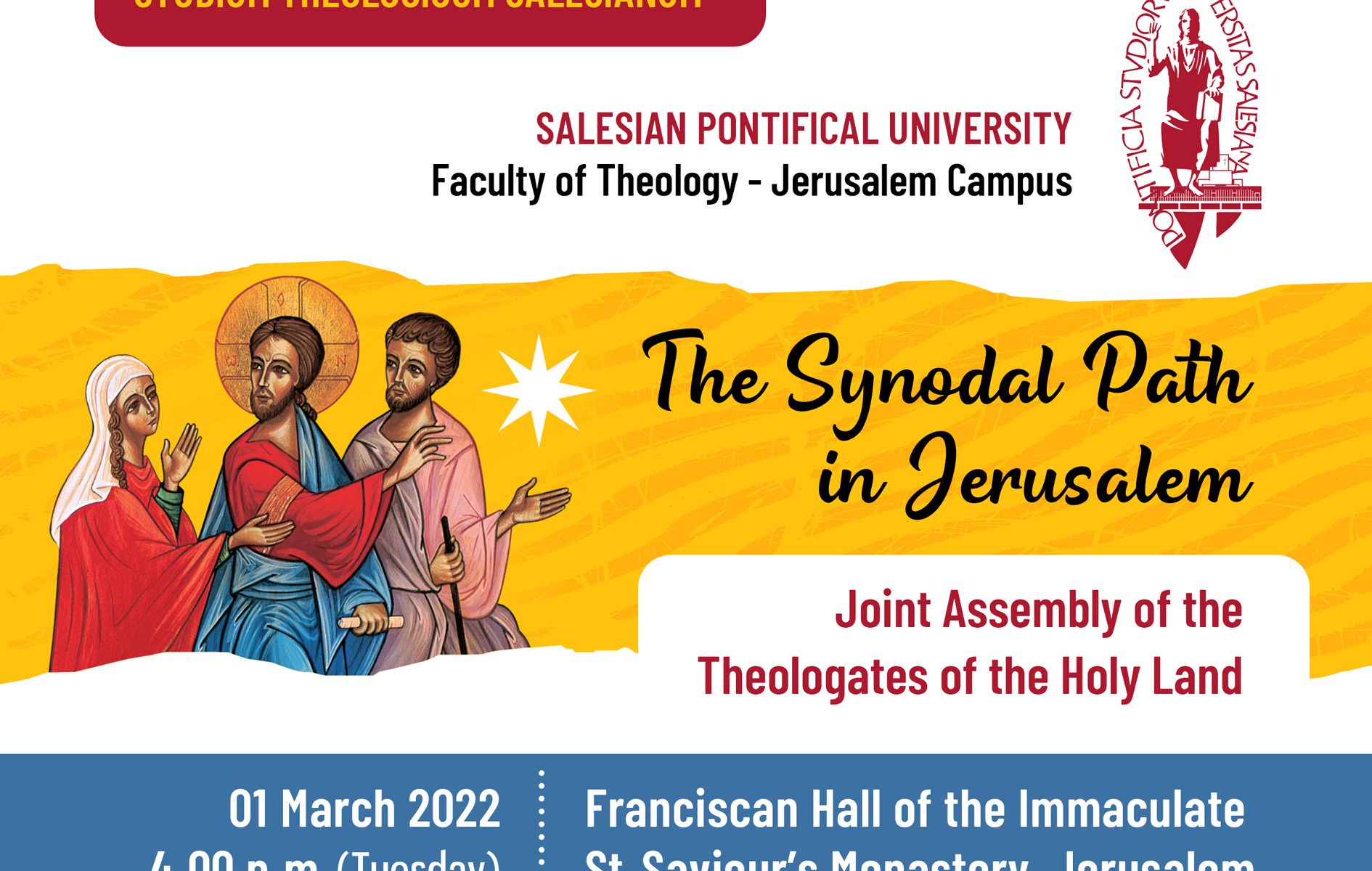 At the initiative of the Studium Theologicum Salesianum, STS Jerusalem campus, a joint Assembly of the Theologates of the Holy Land was held on 1st March 2022 at the Franciscan hall of the Immaculate, St Saviour’s Monastery in Jerusalem. The event brought together students of Theology and their professors from all the theological centres of the diocese and of different congregations from all the Holy Land. The event that started at 4pm, was graced by his Beatitude Pierbattista Pizzaballa, Patriarch of Jerusalem, as the chief guest, the Coordinator of the synod preparatory committee, Father David Neuhaus S.J. and the fifteen members of the Synod Preparatory Committee of whom six made presentations to the students, their professors and the religious men and women who were invited to the event.

After an introduction by Father Andrzej Toczyski, who was also the animator of the program, in which he defined the synod, giving the aim of the meeting, a prayer was said to open the session. The Patriarch of Jerusalem then officially opened the event with a speech that was mainly guided by the International Theological Commission document of 2018; Synodality in the Life of the Church. In his address, the Patriarch gave a brief history of the Synod in the church, what Synod is and what it is not and what is to be done in this Synodal process and what is not to be done, before commenting on the image that guides the Synod process in the Holy Land; the image of the disciples on the way to Emmaus, Luke 24, as the model of the Synodal Path in the Holy Land.

His speech was followed by the projection of a video of the official opening of the Synodal Path in the Holy Land by his Beatitude Pierbattista Pizzaballa, Patriarch of Jerusalem at Kiryat Gat on the feast of our Lady Queen of Palestine.

The next to address the fully packed hall was Father David Neuhaus S.J., a professor of Studium Theologicum Salesianum Ratisbonne and at the same time coordinator of the Synod Preparatory Committee. He introduced the speakers, allocating each a ten minutes duration for his or her presentation. Being one of the speakers, he introduced us into the presentations with a talk on the Synod and learning to listen. He highlighted the need on the part of pastors to listen more than they talk.

The next talk was given Father Amrad Sbarra OFM, parish priest of the Jerusalem Parish who shared about the Synod and the Mission of the Church. He presented the way in which the Synod is being lived with the parishioners, highlighting family visits to children of catechism classes and to the families of the youth groups. “Now is the time to listen” he concluded.

Next to speak was Ms. Sawsan Bitar, a local Coordinator from the Sabeel Centre and also a member of the Ecumenical Committee of the Holy Land. She presented the Synod, Women and Ecumenism and highlighted the role of women in the Church and the views the synod presents as a hope for the people whose voices are not normally heard. She called for dialogue and a movement from where the clergy refer to themselves as we and the lay refer to them as them to a point of us, clergy and lay, for we are the Church.

To bring out the views of the youth was Ms Nadine Bitar, a lay female Chairperson of the Youth of Jesus’ Home Land and assistant at the catechetical centre at the Latin Patriarchate Jerusalem. She presented on the synod, youth and the laity. She said that many young people no longer feel listened to in the Church, adding that listening means active listening; accepting the youth from the heart by the way of giving them a good quality attention. The youth do not only need to be listened to or need to be accepted, they need to feel they are listened to and that what they are saying is taken seriously. Moving from words to actions.

Mr. Dima Ezrohi, a student of classical literature at the Flagellation and at the same time Catechist for the Hebrew Speaking Community and Migrant Workers, presented on the synod Hebrew speakers, migrants and Diversity. He brought to the attention of the audience the challenges the children of the migrant workers are going through in a society of minority in the Church but also in society.

Finally, Ms Dima Kalak, who works with the Caritas of the Latin Patriarch presented the Synod and the marginalised. She highlighted the generosity of the local Christians of the Old city in their support of the poor, especially in the time of the pandemic that devastated lives.

The whole event was conducted in the English language with a simultaneous Italian translation. After the speeches, there was an Open Forum for questions and comments. This successful event was concluded by a thanksgiving speech from Father Andrzej, to the speakers and the participants for honouring the invitation. The session concluded around 6pm with a few remarks from the Patriarch, a prayer and a blessing. All the participants were then invited to a reception for light refreshments and a cordial moment before departing back to their homes and communities.